Communication is the basis of Open Source projects

Avelino (CEO from structy) is creator and maintainer (along with an incredible community of people around the world) of a project called awesome-go List cured by the community of frameworks, libraries and software written in Go. When I started contributing and creating an Open Source project thought that the main focus was code, over the years I started to perform that the project was a way to get somewhere, that is, code has its importance, but it’s not enough to have a project with impeccable code seeing that “nobody” or few people can use.

That’s why we maintainers should create community around the open source project and always encourage other people to contribute.

Another blogpost related to this subject: Behind Open Source projects there are people

Yesterday (2020–07–22) looking at Github’s timeline (people and projects I’m a companion) and came across the creation of a repository called awesome-go-style made by Damian Gryski (from Vancouver/Canada and a great reference in the Golang Community).

Looking at the contents of the repository made perfect sense that it was a awesome-go topic and not an isolated repository as it was being born. I had two to deal with whether or not to talk to Damian about bringing his project to awesome-go.

I assume I already have the not (I don’t want to, it doesn’t make sense, no … any), I took the initiative to write an email to Damian explaining my point of view regarding the awesome-go-style repository and why I thought I should merge the projects — I know many engineers don’t like the subject “selling”, but proposing a change to a software is a selling process because we have to expose and defend our point of view. 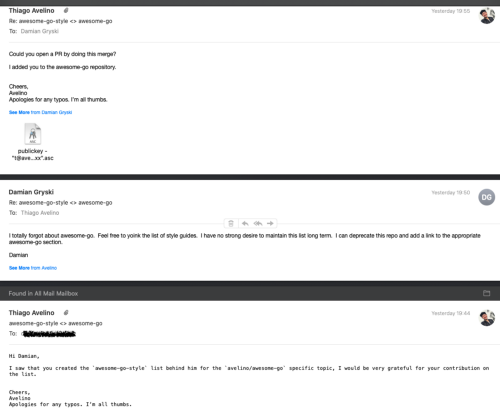 He agreed that it made sense, he had simply forgotten about the existence of the awesome-go project (even being a great project it’s common not to remember some projects when we don’t use them on a daily basis) and accepted to do this merge, allowing me to do the merge.

Of course, I could do the merge (it was to take the content and bring it to awesome-go), but my role as a project maintainer (aka leader) is to create community and encourage people to contribute. I proposed him to open PR (pull request) and contribute.

Evolve your communication skills, writing code is important, but communication comes before code — before writing any code you must understand what is implemented.